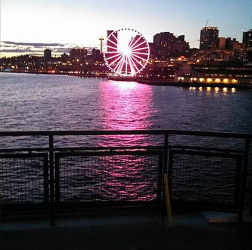 Hello from Seattle, Washington in the beautiful Pacific Northwest.
This website, the Journal of ExtraOrdinary Diversions (Journaled.com), has been continuously online since 1995. I've had the same email address (one of my many anyhow) now for twenty years.

This site is essentially still online for now, for historical purposes.

It was first created in the late 1980s as a print magazine called, The Journal of ExtraOrdinary Diversions. It was to be a locally sourced magazine of interesting speculative fiction (with no poetry as for some reason that was important at the time). The original format and stories are still available but have never made it to publication as a whole. This was happening during a time when my son Nikolas had just been born.

I had him in a chest pack one day as my wife and I walked from our apartment in University Village, up the innumerable steps up to University of Washington campus and over to the "Ave.", University Avenue, the main drag for businesses and restaurants in the "U District" of Seattle, Washington.

While we were in the UW Computer Store on the corner just south of the UW Bookstore where I had also recently worked before getting my job at the UW MCIS department at the UW Hospital (later UW Medical Center), I dropped a computer pamphlet I was reading. I bent down to pick it up and realized I had to turn sideways because of my son strapped to my chest. I did and my left knee snapped. I had trouble walking back home after that.

Eventually I found I needed knee surgery due to the incident. This required a period of sitting around and healing up. It was during hat period that I decided to try and start the Journal of Extraordinary Diversions magazine. So I wrote some stories and my wife wrote one herself, even though she was an artist and art major (we both had attended Western Washington University but we didn't meet until years later).

Back then home PCs and software were problematic. The desktop publishing software I had for my 8088 CPU PC kept crashing. I also had to print it out on a dot matrix printer which didn't look good. I would get the magazine format, lousy graphics and stories almost all properly formatted and then it would crash. It did this repeatedly. I got frustrated and finally just gave up. I'm pretty sure if I could have gotten a clean, good looking print out to make copies of I would have started to distribute it and who knows where that may have led. But it led no where and eventually I forgot about it.

I had a new baby to raise, I was spending more and more time studying on my own time trying to learn more about computers in order to get a better paying job (which I eventually did do), and sending out my fiction. Then the divorce came.

Eventually I met someone, we married and I got that better job as a Senior Technical Writer. My first job after the UW was at US West Technologies. They got me started converting the manuals I was writing for them into HTML for their brand new internal intranet virtual village of documentation and communications. I started doing my own online web work, starting my own web page. I found an author I respected, who had a decent webpage and ripped it off, copying it and updating i with my info but giving a link back to his page. In altering his code I quickly learned HTML.

There was a lot of people complaining about getting ripped off like that. But I told people I didn't care and if you ripped off my web page format, I'd feel flattered, hopefully getting a link on your new page to my old one. When people continued to complain, I explained that in someone simply stealing your code, they got exactly that, a static page, unchanging. While with my page it was going to evolve over time. An unchanged web page or site is a dead one. Web sites are in a way a living thing that need constant updating, examination and care.

In 1994 I wanted to come up with a name for my web site (just a web page at first as so many "sites" were back then). There was a lot of web pages that were called some variation of  YAHP (Yet Another Home Page). Just as with Yahoo which means, "Yet Another Hierarchical (Organized, or) Officious Oracle". My first version was YAAP, "Yet Another Author's Page". But I quickly tired of that when I realized everyone was doing it.

My attempt to come up with something unique was remembering that long unfinished magazine. And so the name from 1994 was published on line with the new DNS and web site name of JournalED.com. The attempt was made to acquire the DNS of Journal.com but that was aleady taken by a company who did journaling for companies.

That single web page grew over time from being a personal page for myself and my writings, and eventually it grew to have additional pages until it grew into a rather large website devoted to several things: writing, computers, film production, martial arts, and for my new wife, horses and horse shows (which eventually became it's own website that I titled, Equitation Station). EquStationc.com itself began to grow as an enttity to help my wife's Arabian horse and horse show business which she taught riding and trained horses professionally. Overtime "her" site (which I ran) grew internationally. Our daughter eventually rode horses too (though she rode horses going back to when she was still in the womb).

Emails came in from Australia and America, Canada and the UK where she had received her certification for teaching riding and jumping (up to 5') from a British boarding school that taught horsemanship. We received many emails praising our site forr tthe information we supplied and the answers to questions she fielded. Until finally she got out of that industry and I sold the site for $500 on eBay. Sadly and unknown to me at the time, it went to a man who bought up web sites with a good amount of hits and then just used the DNS to route people to his main web site. So a valuable site died much to the displeasure of horse show people around the world.

The Martial Arts section I created and oriented to historical information as well as film production connections, won two awards from groups who gave out awards to web sites who had quality martial arts sites.

I started to create a film production section with the desire to make the site go that direction. It grew for a while and I put up a section where people could post about their screenplays for free. But as I got busier in my life eventually it fell by the way side until I simply let it die. However by then it had been online for so long I didn't have the heart to take it down and so, it still exists to this day, albeit no longer being update and so it is essentially a dead site.

I leave it up not just for historical and sentimental purposes.

Better than the internet archive's - Way Back Machine, which never goes deep enough into sites from the past that I'm interested in. Still check if out. If you've never used it it's pretty fun. They have Journaled.com on there going back to January 26, 1998 so that's something, even though they began archiving in January 4, 1996. On one of the JournalED pages on the Way Back you can see it mentions at the bottom of the page an update reference indicating 95/1997, being it first went online in 1995.

So that's the JournalED story going all the way back among four separate decades, through two different wives and along with two kids.

The next stage is currently in play....

- The Publisher and Your Humble Narrator